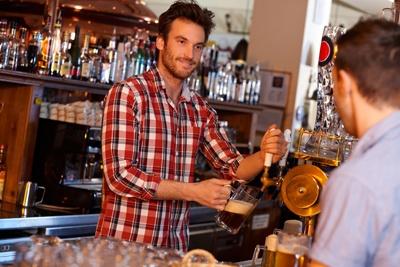 Who doesn’t love a good revolution? Storm the town square, bust open the pub gate with a rusty corkscrew and hoist the Craft Beer red flag.

If only it were that exciting. In the modern habit for hyperbole words like “revolution” tend to get thrown around casually. Craft beer is no revolution, but ‘The Craft Beer Evolution’ doesn’t really have the same zing.

Not everyone’s a fan of craft beer.  One recent critique of craft beers described them as overpriced, “demanding in flavour and overly hoppy”, leaving a drinker with “a chunderous aftertaste  and…room-clearing beer breath.”  What’s more, it is “un-Australian”.

Announcing that something is “un-Australian” should by now make most of us cringe, close the browser window and wash out our eyes with bleach. Like confected patriotism, it’s the last resort of a scoundrel and/or people who have little idea what they’re talking about.

In the context of beer, this claim is perplexing and downright false.

Independent craft brewers are owned and operated by Australian entrepreneurs.  The big “Australian” brands, on the other hand, are an item within a global portfolio of beverages owned by either Japanese (Kirin, parent company of Lion) or South African corporations (SABMiller, parent of Carlton United Breweries).

If you’re solely looking for cheap beer at the bottle-o, then picking up a case of discount German or Asian larger would be the only guarantee of getting $10 or $15 back from a fifty. If cheap is the Australian way, then the modern Australian way is foreign owned.

It should be mentioned that cheap beer is only cheap at the pub because it usually receives a corporate subsidy, by way of a tap or line contract. Publicans receive discounts if they stock exclusive product from one, and only one, of the beer titans.

This is how bars can continue to sling a pot of draught for three bucks to old codgers at the local bowling club. The real cost is much greater if you add the hidden cost of feeding the corporate duopoly and their alleged uncompetitive practices, in effectively locking out boutique brewers. This practice is pending official investigation by the Australian Competition and Consumer Commission. But the authorities have been there before, to no effect.

Regardless of this lock out, craft beer is the only sector experiencing growth within a generally stagnant beer market. To be critical of craft beer is to be clueless about the direction of Australian hospitality, which is driven by a change in consumer tastes.

The fact is, not only is craft beer here, it’s set to take up more and more of the fridge space.

Long gone are the days when a bloke pulled up his bar stool with his mates from the Painters and Dockers Union and spent the best part of his weekly cheque on 17 pints of Carlton Draught. Most Australians don’t drink that way anymore, so the business of booze has changed.

In a trend conscious market, bars and pubs now differentiate largely on product, which includes the beer taps. People want to be excited not only by the food they are eating but the beer they are drinking.

“Craft beer tastes bad” is a simplistic opinion at odds with the changing tastes of many pub goers. In most cases, however, the option of a regular beer is always on offer, which makes complaining about more options at the bar kind of redundant anyway.

On the subject of taste, much of the criticism notes that craft brewers produce beer that is too “hoppy”.  Yes, OK, but this new trend in beer-making is actually a good business move: a start-up brewer needs to be noticed by the early adopter market, and this market seeks out certain types of beer.

Patrick Ale suggests that once craft beer becomes more established, the market will expand to accommodate all drinkers.

In terms of flavour profile, high hopped beer may plateau as consumers tastes change and move more toward ‘session-able’ beers with less hops but high flavour and even lower alcohol.

The rise of craft beer is not only good news for bars and brewers, but for primary producers as well. The key ingredient behind much of the flavour in beer is hops. Hops were widely grown in the Derwent Valley in Tasmania and Northern Victoria, but as the beer market homogenised in Australia, so did the plant. Eventually, growers were only cultivating varieties which had a high concentration of Alpha acids, the compound which makes beer ‘bitter’.

The need for lower hop volumes in beer production practically killed hop production in Australia, until craft beer revitalised the industry a few years ago. The demand for different “aroma” hop varieties has seen the rise of “Galaxy,” “Enigma” and “Summer” hops as well as the cultivation of new varieties such as “Melba”. These unique aroma hops present a new opportunity for both Australian hop and beer producers who want to differentiate and compete on a global scale.

Craft beer sales are growing is growing, but they still only represents about 2% of the Australian market.  Looking at the experience in other markets, however, the room for grow is promising.

“If we look at the United States, craft beer has been in phenomenal growth for the last 10 years and is now 10% of their total beer category… so I believe there is still a huge amount of growth to go for craft beer into the future,” Patrick Ale explains.